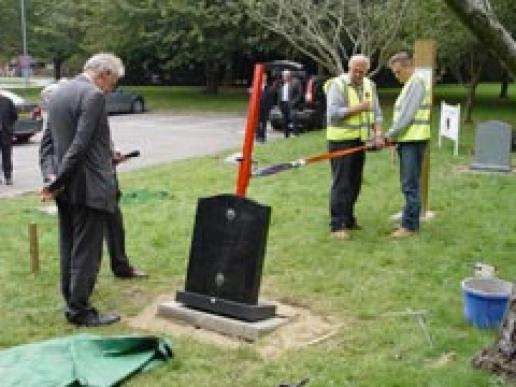 Not yet cut and dried, it seems. The debate on how to test the fixings for memorial headstones is perhaps not over yet.

The lawn memorial standard BS 8415 due to be up-dated this year might yet not include a safety fixing test regime that involves a dug pit and washed sand.

On 5 March, the sub-committee reviewing the standard met and seemed to have agreed what should be in the standard (read the report of that meeting here). The standard has to be verified by the main committee of British Standards Institution dealing with stone but that was expected to be a formaility.

Perhaps not. Rumours suggest that the method of testing fixing systems for headstones might not involve a dug pit filled with sand after all.

After the meeting of the sub-committee on 5 March, the National Association of Memorial Masons (NAMM) declined to comment on the outcome, although John Smith, one of the NAMM members who sits on the BSI sub-committee reviewing the standard, conceded that discussion about the method of fixing memorials had been "batted around - and quite intensely at times".

He said there was no intention of cutting corners on safety but fixing systems had to be user friendly as well as safe.

The most commonly used fixing system involves stainless steel ground anchors that are hammered through a hole in a base, leaving enough protruding above for a headstone to be positioned on. It is quick and simple and would normally be expected to prevent the headstone falling over quickly (failing catastrophically, as it is described) if it were to be subjected to a load.

NAMM has previously tested and approved ground anchors in a cemetery in Northamptonshire. But no pits have been dug, the ground being considered to satisfy the standard's requirement for the anchors to be tested in sand and gravel ground conditions.

Anton Matthews, who makes the Stone-Safe fixing system, has long-since argued that the test procedure should be repeatable and therefore should involve a dug pit filled with a standard material (sand). He has demonstrated the stability of his system compared with ground anchors using this method (there is a video of one of the demonstrations on YouTube here). It looked as if this dug-pit-filled-with-sand testing method was going to be adopted in the revised standard. Anton has argued that this method was verified as the correct testing method by BSI's own construction and testing section.

There were about 160 comments on changes proposed in the revisions to the standard when it was out for public comment, a period which ended in January. All the comments were considered by the sub-committee reviewing the standard before it reached its decisions. But now it looks as if the debate is not quite over.

There seems to be concern about the use of sand and gravel as the medium for testing ground anchors. This has been the required medium included in BS 8415 since its previous revision in 2012, and NAMM has argued that the ground conditions it has used to test memorials in Northamptonshire have fulfilled this requirement.

If the testing method does change, presumably all the ground anchors already approved would have to be tested again in order to comply with the new test method required in the revised standard. If, however, the ground condition requirement is changed and the dug pit requirement is abandoned, NAMM could argue that its tests results remain valid.