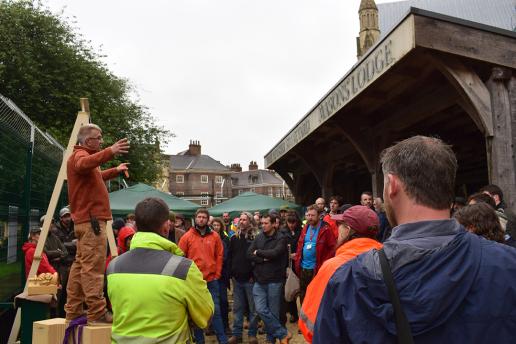 Nigel Copsey welcomes the international delegation of those interested in traditional building techniques to a day of demonstrations of lime and earth mortars, plasters and renders at the York Minster Masons' Lodge during the Building Limes Forum symposium from 10 to 12 June.

The Building Limes Forum held a three-day symposium in York this month (10-12 June) to present a thorough and international perspective on traditional building using lime and earth mortars. Nigel Copsey of the Earth, Stone & Lime Company & Associates, opened the symposium by pointedly welcoming those from mainland Europe who were attending the event because he said a lot of research is carried out by the EU and information about the use of lime and earth building is developed internationally. He hopes this collaboration will not be damaged by Brexit.

Europeans were not the only overseas visitors to the event. Some had come from as far away as North America and Asia to find out the latest developments in stone-friendly construction and repair, although there were also plenty of people from the UK and Ireland among the 100-130 architects, conservators and practioners who attended each of the days.

The aim of the Building Limes Forum Symposium is to encourage a dialogue between architects and conservators and the masons who have to use the products. The damage the specification of hard cements has caused to historic buildings by trapping moisture in stone is now legendary. The Building Limes Forum says hydraulic lime is not much better and can become as hard as OP cement, even if it takes a bit longer to reach that hardness. The Building Limes Forum advocates the use of softer hot limes and earth limes, which would traditionally have been sourced from wherever the buildings were being erected using materials dug out of the ground with little or no refinement apart from the addition of pozzolans and fibres (often straw or animal hair).

Alison Henry from Historic England was among those who attended the symposium. She had been involved in a CPD to Stone Federation members in May, when she advocated the use of traditional building methods (you can read about that here...).

Read the report from Natural Stone Specialist magazine here. There is also a short video of the event below.

Next up from the Building Limes Forum is its 2019 Conference & Gathering, from Friday 20 September to Sunday 22. It will be at the Historic Environment Scotland Conservation Centre at The Engine Shed, Stirling, Scotland. It is a bit more of a social event than the business-like York symposium. Find out more...