Preserving the spiritual home of the House of York 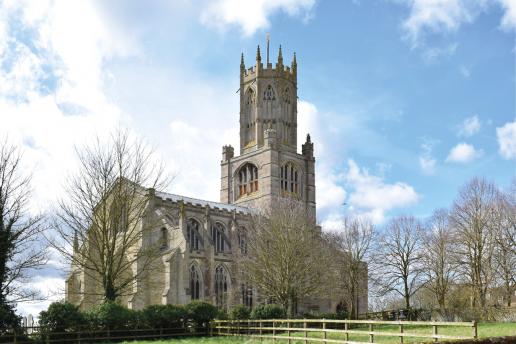 The Church where Richard III was baptised. Heritage Masonry Contracts has helped preserve Its distinguished history.

The Church of St Mary the Virgin & All Saints at Fotheringhay has a distinguished history that Lincolnshire stone specialist Heritage Masonry Contracts has helped to preserve.

Fotheringhay in Northamptonshire is a small village with an impressive church that is visited by people from all over the world. It is the church of St Mary the Virgin & All Saints, and the reason it is so fine and of interest to so many people is because it is where the Plantagenet kings of the House of York (the white rose in the Wars of the Roses) liked to pray.

Richard III is said to have been baptised there. His great-uncle Edward, his parents and his brother Edmund are buried at the 15th century church, where the Dukes of York, who lived in the castle at Fotheringhay (practically nothing of which remains above ground), had a family mausoleum. 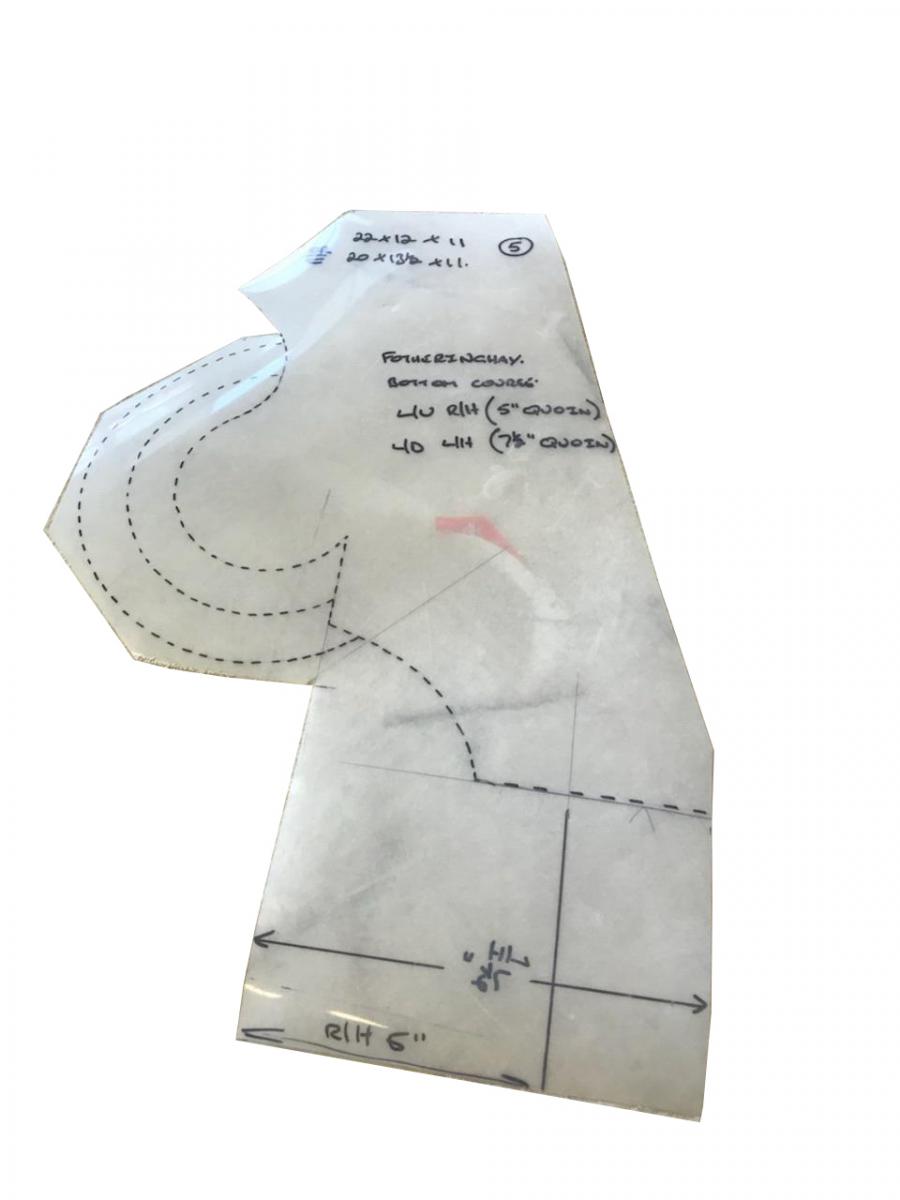 The king had the bodies of his father, Richard, Duke of York, and his brother Edmund, Earl of Rutland, brought back to the church for reburial after they had been killed at the Battle of Wakefield in 1460. They had  initially been buried at Pontefract. They now occupy spaces either side of the altar, covered by elaborate memorials.

Templating for the west door was a difficult task due to the level of erosion on the mouldings.

Finding the bones of Richard III under a car park in Leicester and re-burying them in the cathedral there in 2012 has revived interest in the monarch and anything associated with him, such as this church. 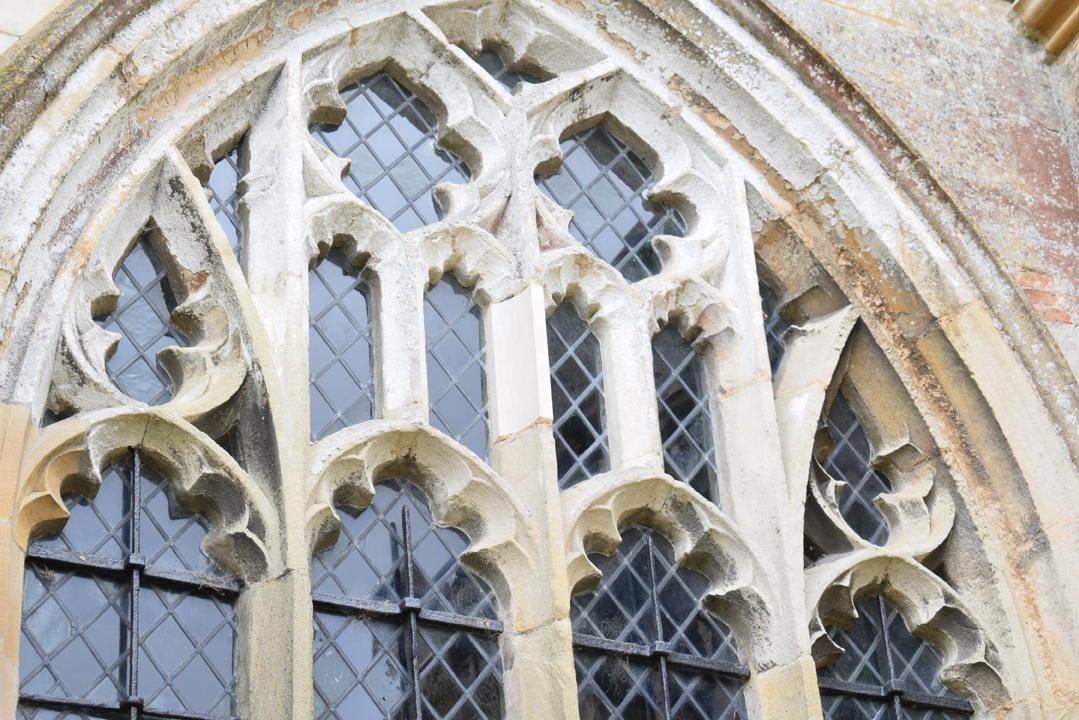 Keeping the Church of St Mary (as it is commonly more succinctly abbreviated) in its fine condition requires regular work. The latest contribution to that work involved the renovation of the roof and gutters and the replacement of weathered stone.

The stone used to build the church – it was constructed in several phases up to the 1430s – is believed to have come from Wealdon. For the renovation work, Ancaster Hard White was selected as the replacement. 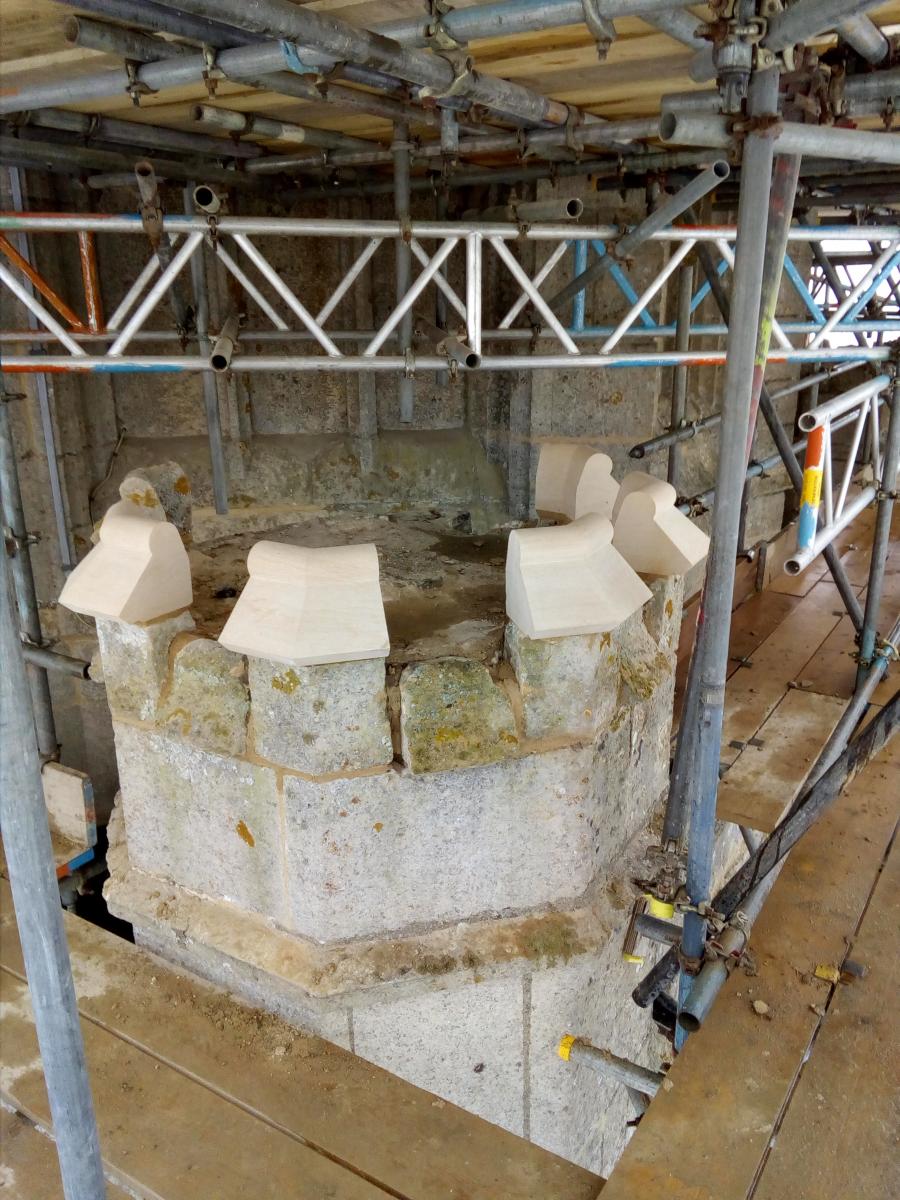 The specialist stone contractor was Heritage Masonry Contracts (HMC) Ltd of Bourne, Lincolnshire, working alongside Restoration & Conservation Contractor CEL of Whittlesey, which was the principal contractor undertaking all other works. The architect was conservation and heritage specialist Caroe Architecture.

Fund-raising was a community effort, and included donations from the Listed Places of Worship Roof Repair Fund and the Richard III Society. The generosity of the donations and contributions turned a patch and repair job into a major £1.5million restoration programme.

HMC was originally brought in to carry out £10,000 worth of chasing for the leadwork, which had to be chased into joints so the stonework was not touched. That would have taken about six weeks. The company ended up spending a year there and carrying out £100,000 worth of masonry and mortar repairs as well.

One of the most difficult aspects was reproducing stones for the grand west entrance to the church. Producing templates was difficult because of the level of erosion of the existing masonry.

Sean Knight, Managing Director of HMC, says: “The Church Warden, Bill James, was extremely helpful and managed to find an old book on the building which had some original sketches of the door stonework. This proved very helpful in replicating the original stone.”

The architect wanted a putlog hole plugging with a stone set back slightly from the face to indicate what it was. It was to have the date carved into it in Roman numerals, so anyone working on the church in future generations would have an idea about what it is. Behind the stone is a time capsule containing the names of the masons and architect who worked on the project along with a photograph of the team.

There are other examples of craftsmen who have been involved in the church leaving their names on their work. Most notably, perhaps, the tenor bell in the tower carries the inscription “Thomas Norris made me”.

The square tower topped with an octagonal lantern is one of the most striking features of the church. HMC repaired 270 linear metres of guttering on the tower and replaced weathered copings on the four turrets. 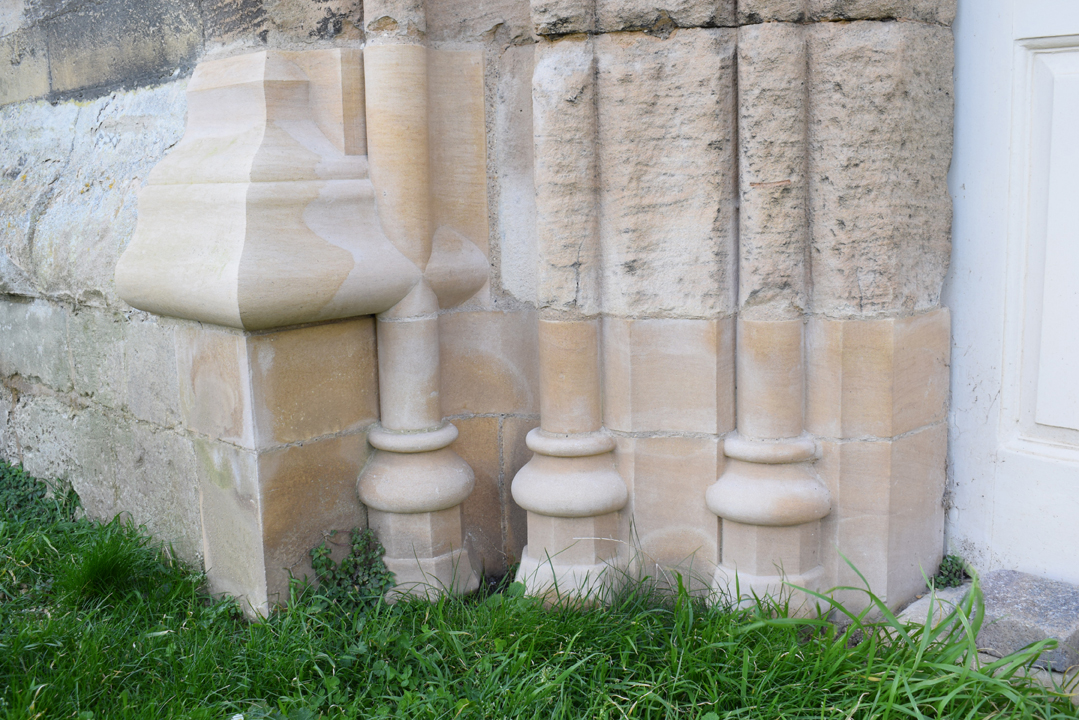 The copings had seriously eroded due to their exposed location, and where it was not possible to retain the original stone, it had to be replaced with stones dowelled in position.

All four turrets originally had carved figures on them, only two of which remain. They are badly weathered and it is not possible to see who they were intended to represent. They have not been replaced. Once the copings had been repaired the top of the turret was screeded so water would fall into the gutter. 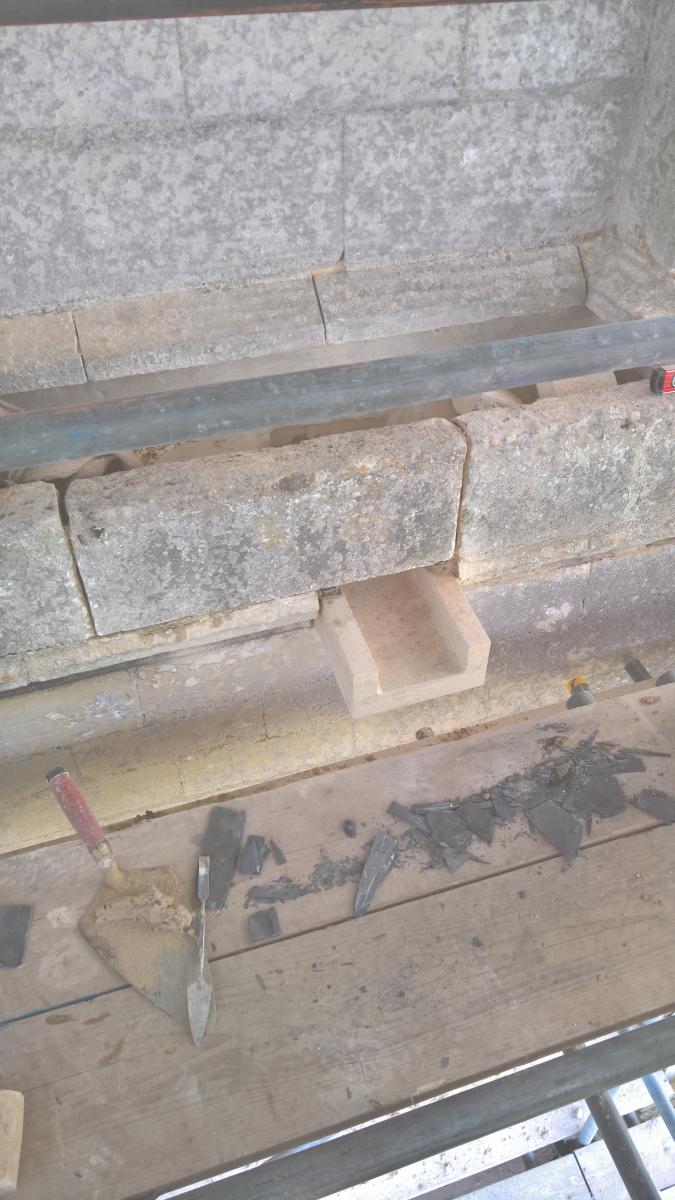 New gutter chutes were installed to accommodate the changes in the falls due to inadequacies in the previous layout. The chutes were worked from the same Ancaster Hard White limestone as the rest of the work with a lead detail.

As well as the replacement stone, there were some 240m2 of repointing required on the job and some plastic repairs.

The mortar mixes were varied, but they were all based on a gritty 3:1 NHL 3.5 (hydraulic lime) mix to match the colour of the original. The sand came from Husbands Bosworth in Northamptonshire. 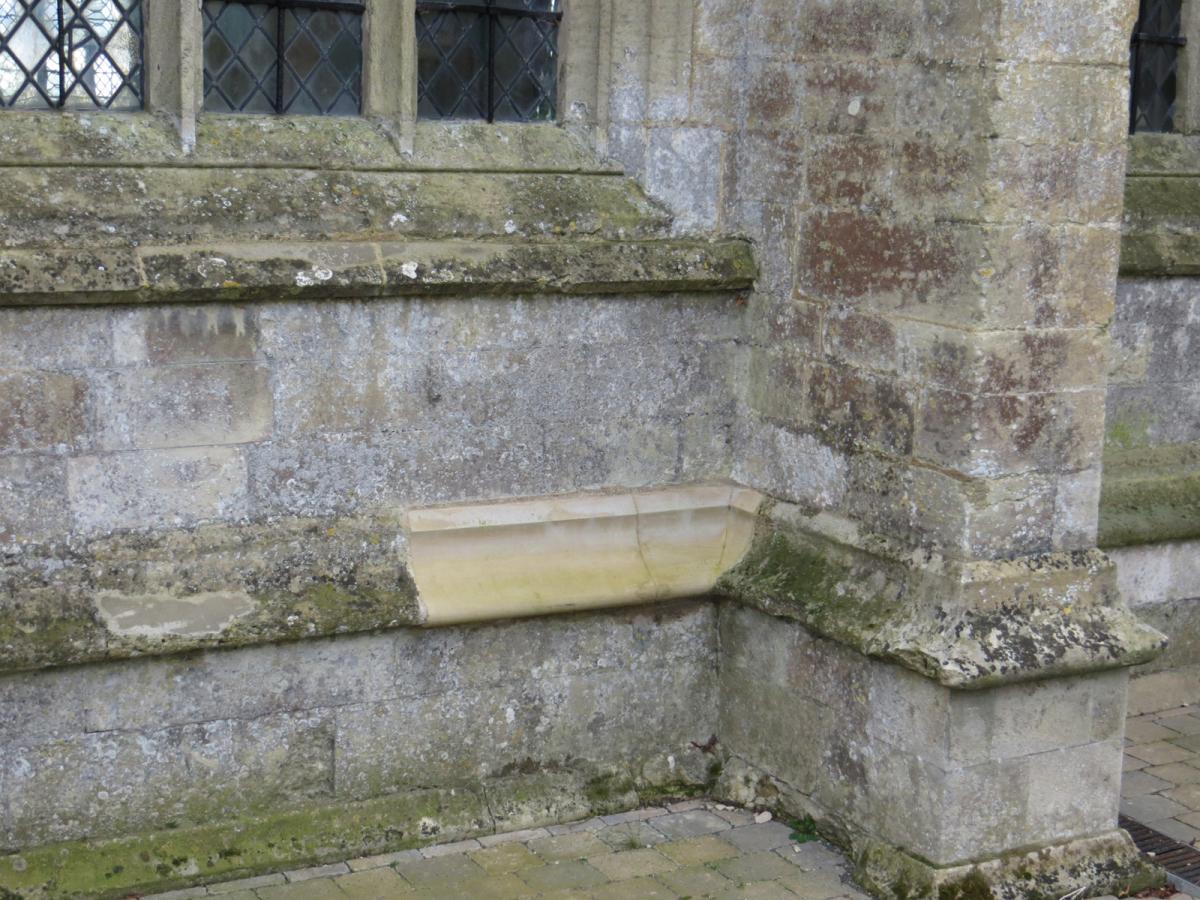 Sean Knight says it was an interesting project that became close to the hearts of his team in spite of the hard work involved. He says the Church Warden explained a lot about the history of the building to them, which gave them an emotional involvement in it. “It really is a splendid building, steeped in history. It was a privilege to work on it.”

Fotheringhay was a big job for HMC but it is now working on Wentworth Woodhouse in Rotherham, which, as Sean says, “is absolutely colossal”. HMC is replacing stonework on the chimneys, cornices and balustrades, including renovating 20 Urns and supplying two new ones. 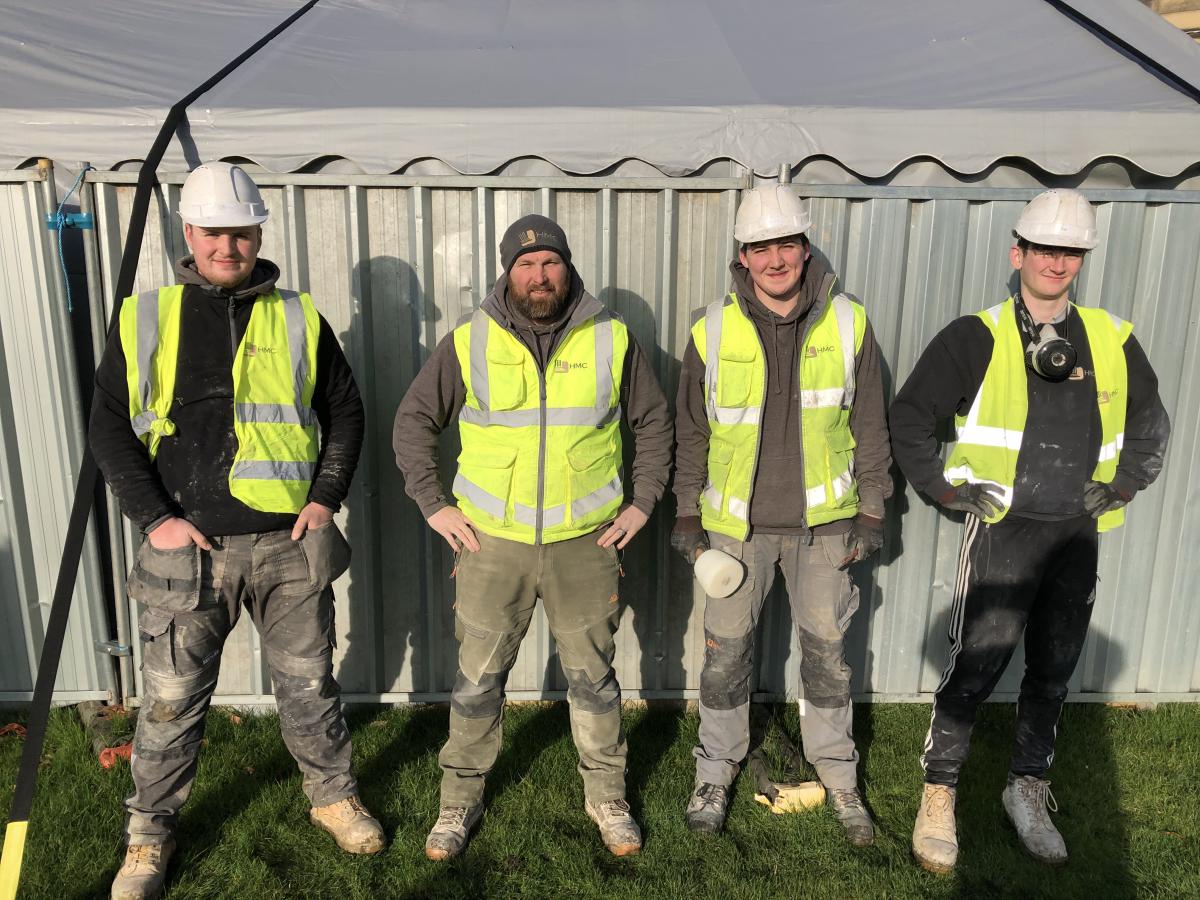