Curling stones : The making of an Olympic champion 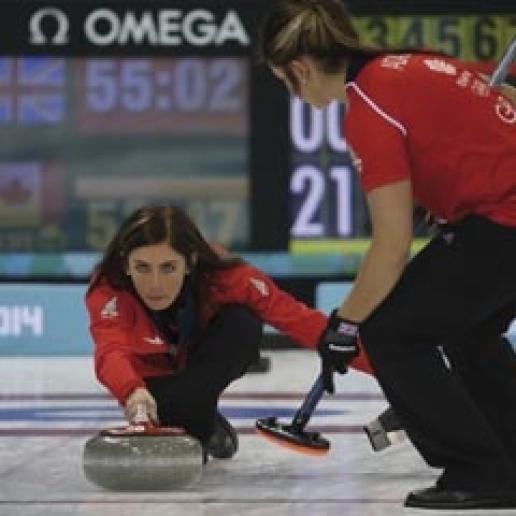 At the Winter Olympics in Sochi this year the UK men’s curling team won a Silver Medal and the women and Paralympics teams both won a Bronze. Helping them to their victories were the stones used at the games made by Kays of Scotland in Ayrshire. NSSâ€ˆtakes a closer look at the making of a curling stone.

Kays of Scotland, just south of Glasgow, is one of the most niche businesses in the stone industry. It makes curling stones… and not much else apart from some memorabilia and trophies associated with curling.

It is one of the two main makers of curling stones still supplying the market – the other is in Canada. And it attributes much of its success in the curling world to a unique asset: the stone from a tiny island called Ailsa Craig 10 miles off the coast of Scotland in the Firth of Clyde.

Although it is an island (and also a bird sanctuary) it is little more than a lump of rock covered in grasses. It is about half a mile long and a third of mile wide, rising to a height of 338m. The stone shows the same distinctive hexagonal columns as are famously seen at the Giants Causeway in Northern Ireland – and for the same reasons. The island is the result of intense volcanic activity about 60million years ago.

Fortunately for the birds who nest on Ailsa Craig, the world demand for curling stones is not huge. The 10 people at Kays of Scotland only make and sell between 1,000 and 1,200 new stones a year. Those stones would usually be expected to last 20-40 years in regular use and can be refurbished, which is also a part of Kays’ business.

Unfortunately for Kays, the stone is not easy to recover from Ailsa Craig. Whenever the company needs some more of it, it has to take all the equipment it uses to recover it to the island in order to load some blocks on to a boat and then bring it all back again.

For a while in the 1990s Kays tried making life easier for itself by buying Trefor granite from Wales. But in the end the company decided the granite was not as good for curling stones as the particularly dense, low quartz content stone from Ailsa Craig. It returned to the island for what it considers the best stone. Certainly the world of curling seems to like it and has used Kays’ stones for the past five Winter Olympics.

Because Kays does not use much of the stone, it does not have to visit the island very often. One of the occasions it did was last year. It hired a landing craft that had been used during the Faulklands war to take an excavator over to the island and bring the stone back. It took about three weeks and Kays does not now expect to have to return to Ailsa Craig for another decade or so.

Kays does not have the saws necessary to turn the blocks into slabs and sends them first to Fyfe Glenrock in Aberdeenshire to be cut to the thickness required of 150mm.

Back at Kays, a core drill is used to cut out the basic ‘cheeses’ from which the stones are made. The body of the stone is Common Green stone with a sandblasted edge to roughen it up where it collides with other stones. The bottom of the stone, where it runs on the ice, is Blue Hone, which Bill Hunter, Kays’ Factory Manager, describes as a “very, very tight grained granite” that is exceptionally hard. The bottom is dished, so that a ring just 5.5mm wide is all that is in contact with the ice during a game.

The shape of the stone is critical. To achieve it the stone goes first on to a lathe – and Bill says the machines Kays use are older than he is. The company has, after all, been making curling stones for more than 150 years. The lathes are semi-automatic but do not have computerised controls.

The stones are finished by hand and all end up within a few grammes of 18kg (40lbs) with the handle adding nearly another kilogram (2lbs). Kays was instrumental back in the 19th century in setting the weight at 40 pounds plus the handle and these specifications for indoor curling stones have been adopted throughout the world.

The knowledge and skills as to how to make world quality curling stones for this most competitive sport have been handed down through the generations in an unbroken line. To this day Kays is still a business wholly-owned by the Wylie family. And every stone dispatched from Kays has a unique registration number on it identifying the precise spot on Ailsa Craig it came from, so if there are any problems the area that caused them can be identified.

And it is not just the stones that have to be perfect, so does the ice. A great deal of effort goes into creating the perfect surface to play on and Kays also has its own expert in the preparation of the ice to help those creating new curling venues like the one built for this year’s winter Olympics. The stones for that were sent out a year ahead of the games to ensure everything was perfectly prepared for the event.

Even a hair on the ice can deflect the stone and the ice boss that dresses and smoothes the ice has a blade trimmed to an accuracy of 1,000th of an inch. Temperatures are also critical and at the Olympics were even adjusted for the number of people watching so that the ice remained perfect.

Kays of Scotland received a lot of publicity from the Olympic games this time, being featured many times in the national press and on television. But it has not gone to Bill Hunter’s head. He is not expecting a big increase in demand for the stones as a result and says the company always has plenty of work in hand, with even refurbishment work booked up to a year in advance.