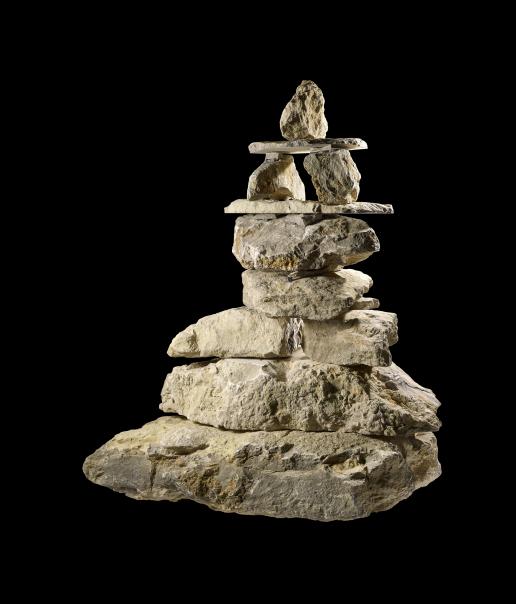 The Inuit Inuksuk created by artist Piita Irniq for the British Museum.

It is not every day you get an Inuit artist visit your quarry, but Kentish Ragstone producer Gallagher was delighted to welcome Piita Irniq, who is also an educator and statesman, to its Hermitage Quarry near Maidstone in Kent when he was looking for stone to use to make an inuksuk (an Inuit stone cairn) for the British Museum.

Pita Irniq was sponsored by the High Commission of Canada in the UK to build the inuksuk for a major exhibition, tentatively titled Arctic Homelands / Changing Climates, that the British Museum is planning for next year (28 May-23 August 2020).

Piita grew up in Naujaat in Nunavut, Canada, and has built numerous inuksuit, both in his homeland and throughout the world for various cultural institutions.

In March this year, Piita and British Museum employees travelled to Hermitage Quarry to assess the stone. Staff from the quarry laid out various shapes and sizes in large piles and Piita chose those he wanted to craft into his inuksuk.

He noted, “As an inuksuk maker, I already know in my head what I am going to make. I have the shape visualised in my head.”

The stone selected was shipped to the British Museum, where Piita built the inuksuk in the Museum’s stone conservation lab. He stacked the lighter stones and used a lift with the heavier ones. He chiselled surfaces to make them fit together perfectly. By the end of the day, with the help of the museum's stone conservator Tomasina Munden, it was finished. It is approximately 2m high with a base 1.65m wide by 1.3m deep.

That would normally be it for an inuksuk in the landscape, but the British Museum is concerned to make doubly sure it is safe for visitors and Tomasina Munden is securing the stone together with steel dowels for the exhibition. It will mean it can be built and taken apart as needed, especially for moving as it weighs almost two tons when assembled. The bottom stone is permanently fixed to a base so it cannot fall over.

The inuksuk for the British Museum has a 'look through' that will direct your attention to a specific location in the exhibition. For thousands of years Inuit built inuksuit like this to indicate specific, relevant locations.

Piita says whenever he sees inuksuit he feels reassured and hopeful. “The inuksuk is a silent messenger for Inuit; a voiceless land marker built by Inuit for many thousands of years. It symbolizes the survival of the Inuit. It is normally built in areas of good fishing, good seal hunting, good caribou hunting, and crossing places.”

Today, inuksuit are used as symbols of direction and hope. An image of one is represented on the Nunavut flag.

The exhibition has not received universal approval, as some Inuit have complained it is a misappropriation of their culture. But as its aim is to highlight climate change and the threat that poses to the Inuit culture, perhaps most will embrace the British Museum initiative.