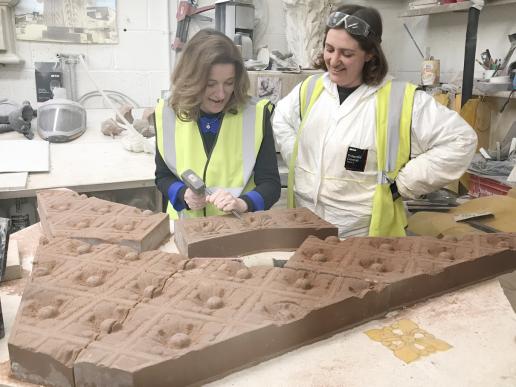 Apprenticeship Ambassador Gillian Keegan MP has a go at stonecarving under the watchful eye of apprentice Emma during her visit to Chichester Stoneworks as part of National Apprenticeship Week - appropriate, too, that 8 March, when Gillian Keegan visited, was International Women's Day.

She met Chichester Stoneworks apprentices Emma Sheriden and George Wilson, talking to them about their own apprenticeship experiences and future aspirations. She was given a tour of the workshops and even had a go at carving… under the watchful eye of Emma.

Adam Stone, Chichester Stoneworks MD and Deputy Chair of the Craft & Training Committee of The Worshipful Company of Masons, is commited to training. He has worked previously with Michelle Turner of Stone Restoration Services, who chairs the Natural Stone Industry Training Group (NSITG), and has led the development of stone’s Trailblazer Apprenticeships.

Speaking with Gillian, Adam explained the difficulties of achieving the standards for the new Trailblazer scheme.

Trailblazer apprenticeships were launched in 2013 with the government pledging the creation of 3million apprenticeships by 2020, which has since been criticised for focusing on the quantity rather than quality, although it is an important platform for ensuring those who do not go to University still have opportunities to develop essential work and life skills in the workplace.

Currently, the new Trailblazer apprenticeship for stonemasonry is stalled in development due to some of the issues involved in creating these schemes. One issue is that the government has listed the new apprenticeships for stone among the crafts, whereas the industry wants them to be considered as part of construction.

Gillian agreed that the process seemed ‘log-jammed’ and would make her own enquiries looking into the issues further.