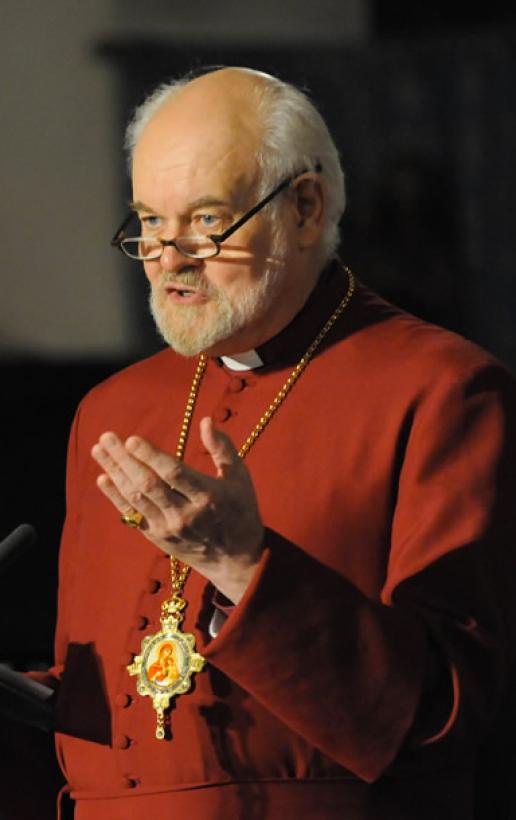 The Lord Bishop of London, The Rt Revd Richard Chartres.

On 12th October 2015 the Lord Bishop of London, The Rt Revd Richard Chartres, spoke in the Second Reading debate on the Government’s Enterprise Bill to highlight the importance of apprenticeships. In doing so he declared an interest as part of an organisation (the Church of England) that is responsible for maintaining 45% of Grade I listed buildings and in doing so provides training opportunities for stonemasons and other trades.

The Lord Bishop of London:

My Lords, as has been said, the Bill is modest in ambition but still very useful, especially the proposals in Part 4 setting targets for apprenticeships and containing measures for protecting the brand.I was fascinated by the Minister’s throwaway suggestion that there ought to be some ceremonies to symbolise the successful conclusion of apprenticeships. Speaking as a representative of “Rituals ‘R’ Us”, I could certainly offer a consultancy. We might even have apprenticeships in the Diaghilev industry that I can see growing today.

I was recently at the topping-out ceremony for the new Bloomberg building in the City of London. It covers three acres and will contain the largest quantity of stone of any building in the City since the construction of St Paul’s, so I dread to think what has happened to Derbyshire as a consequence. Five million hours of labour had already been put in before the ceremony, and there will be another 9 million before the centre is finished. The talk was all about a point that has already been made by other noble Lords: getting Britain building and, in that context, the vital importance of apprenticeships in securing the supply of properly qualified engineers and tradesmen. There was a special emphasis on the restoration of the dignity of making. That is obviously a very considerable cultural challenge and the direction has gone somewhat in another way, but presumably the measures to enhance the credibility and status of apprenticeships are partly aimed at addressing that. “The dignity of making” was one of Lord Foster’s phrases on the occasion of this extraordinary launch.

In the City of London, of course, regulations governing apprenticeships, to which the Bill contributes a 21st-century coda, go back to the 13th century. Then, the minimum was seven years and sometimes longer, and I hope that the Minister is aware of, and looks to, the 109 [there are actually 110 - Ed] livery companies as allies. They are small businesses in themselves and, as part of their extensive involvement in education, they have also increased their involvement in craft-based apprenticeships. Companies such as the spectacle-makers are participating in advanced three-year apprenticeships and they have certainly acknowledged the support of BIS in getting their scheme off the ground. They are part of the Livery Companies Skills Council, which was set up in 2013 to support all manner of craft-related apprenticeships.

I declare an interest in representing 16,000 small businesses—parishes, church buildings and cathedrals—with a responsibility, among others, for maintaining 45% of all the Grade 1 listed buildings in England, which are a vital part of our cultural inheritance. So we are also vitally interested and involved in the high-level training of stonemasons and other apprentices. The Cathedrals’ Workshop Fellowship is part of the effort. It was created in 2006 and nine cathedrals, including Canterbury and York, are currently involved in work-based programmes validated by the University of Gloucester. We very much welcome the emphasis on protecting the status of the brand. Measures to increase the supply and enhance the status of apprenticeships are very welcome. In life generally, apprenticeships are the way to success and mastery. The alternative is overnight stardom, but there is no legislating for that.