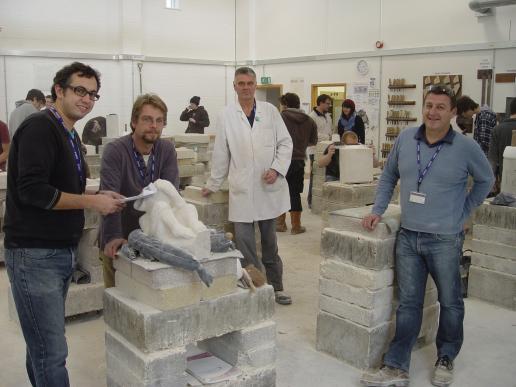 It was a Weymouth College student, Chris Berridge, who won Gold at WorldSkills. That was followed by the College sweeping the board at both SkillBuild and UK Skills Challenge. Now more stonemasonry courses are to be introduced when the College exhibits at the Natural Stone Show in London 30 April–2 May.

It speaks volumes that students from Weymouth College swept the board at both SkillBuild and the Stone Federation’s UK Masonry Skills Challenge last year. One of the college’s team, Darek Malecki (who was in third place in both competitions) was also the national Trainee of the Year, receiving his trophy from TV builder Tommy Walsh at the Natural Stone Awards at Lord’s cricket ground in November. The year before, Chris Berridge, who did a foundation degree at Weymouth, won Gold Medal at WorldSkills, held at ExCeL London – where the Natural Stone Show opens on 30 April this year with Weymouth College among the exhibitors.

So what makes Weymouth so successful?

The obvious answer is the skills of some exceptional students. Darren Lawrence, stonemasonry team leader with Richard Mortimer, says Chris Berridge is the only student who has ever earned more than 90% in his assessments.

The success of Weymouth has been in spite of the fact that the college does not have a large number of students to choose from – although it is attempting to attract more by exhibiting at the Stone Show this year.

Of course, even exceptional students rely on the lecturers teaching them, which at Weymouth is Darren Lawrence and Richard Mortimer, supported by a technician and some part-time staff.

Darren was appointed as a team leader in 2011. He had trained as a mason on Portland, had worked for Odlings and was a lecturer at Bath College for eight years before joining Weymouth. Richard has been at Weymouth for 30 years and taught Darren when Darren was an apprentice.

Richard says the big change he has seen in 30 years is that the courses have become more interesting for students. Darren agrees, describing the courses these days as “edutainment”.

That might be one of the reasons why students at Weymouth are doing so well, although Darren believes a major factor is because the courses have been condensed.

In most colleges, students on Levels 2 and 3 attend college 21/2 days a week. At Weymouth they do four and complete the courses in two years rather than three. Most of the students spend the other three days a week earning enough money to pay for their studies and digs.

The idea of condensing the courses was to save the students a year’s fees, which is understandably popular with the students. The increased density of learning would also seem to have benefits in honing skills. The fact that most of the stonemasonry students at Weymouth are over 25, rather than school-leavers, might also contribute.

As well as 12 first year and 11 second year full-time students, Weymouth has four first year, nine second year and five third year apprentices studying for their Construction Diplomas on block release courses that last 12 weeks for each of the three years.

And they have first and second year students taking the Architectural Stonework & Conservation Foundation Degree that is run by Weymouth College in conjunction with Bournemouth University.

The stonemasonry department of Weymouth College is housed in a purpose-built ‘Skills Centre’ in Poundbury, the extension of Weymouth being built on Duchy of Cornwall land.

The Duke of Cornwall is Prince Charles, who has had a significant influence on what is being built at Poundbury, insisting on a variety of architectural styles in order to create the look of a traditional English town that has expanded over the centuries.

It was always intended that the development should include commercial and industrial units as well as housing so the area would not simply be a dormitory. Weymouth College wanted a presence on Poundbury and Prince Charles wanted the stonemasonry department to be there – there is quite a lot of stone in the buildings of the development. Prince Charles opened the Skills Centre for the College in 2009.

As well as Darren and Richard, who are full time lecturers supported by Dave Good, a full-time technician, there are part-time lecturers on the foundation degree course. They include Philip Scorer, who trades as PS Conservation and teaches fixing and site skills, Jen Nixon, who works for the local authority and teaches students about regulations and grants in conservation, and Peter Loizou, a Cypriot who teaches lettercutting, carving and architectural history.

In conjunction with computer design, the college has invested in a large format plotter to output templates – use of which is rented out to local companies. Apart from the obvious benefits to the companies, the co-operation helps keep the commercial and education sides in touch.

And in September, the students’ logs all went digital so they could use their smartphones and tablets to access and update them rather than having to keep them on pieces of paper in a file.

Weymouth’s is a success story that the College is keen to build on and Darren says there will be more courses added in the new academic year starting in September. Details will be announced at the Natural Stone Show in ExCeL London 30 April to 2 May.